As part of the FP7 funded MIDAS project (Managing Impacts of Deep-seA reSource exploitation), in July 2016, the IMAR-UAz team joined a field testing cruise onboard the RV Pelagia to the Condor Seamount in the Azores (Figure 1a), with the objective to trial novel environmental monitoring technologies and techniques to assess the potential risks to ecosystems posed by deep-sea mining and test potential mitigation strategies. 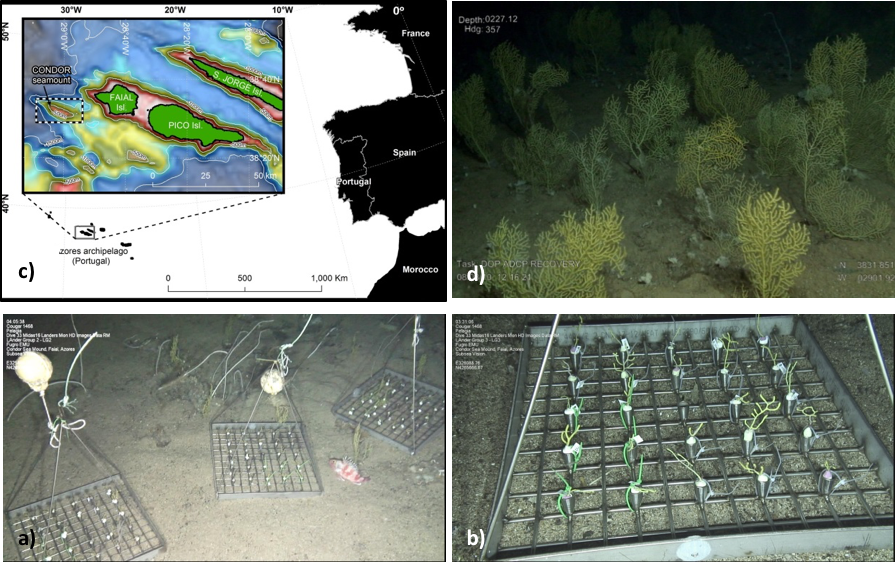 (a) Condor Seamount in the Azores Archipelago; (b) Dentomuricea meteor coral gardens at the summit of the seamount (227 m); (c) landers used in the coral restoration experiments; (d) close-up of coral nubbins used in the landers

IMAR Azores team also presented MERCES project to the general public: how active restoration of deep-sea corals will be tested in MERCES, where most of the experiments will take place and how the physiological condition of restored corals will be measured in MERCES. Telmo Morato described, on behalf of IMAR and HW, that WP4 will apply the lessons learned from terrestrial and coastal ecosystems to develop principles of deep-sea restoration and will develop tools and methodologies for deep-sea restoration. Have a look at our video gallery and stay tuned for more WP4 developments!

In MERCES the UdG-CSIC are developing innovative restoration techniques using both ex-situ and in-situ methods to promote recovery of Cystoseira barbata and Cystoserira crinita populations through recruitment enhancement in Catalonia and Balearic Islands. 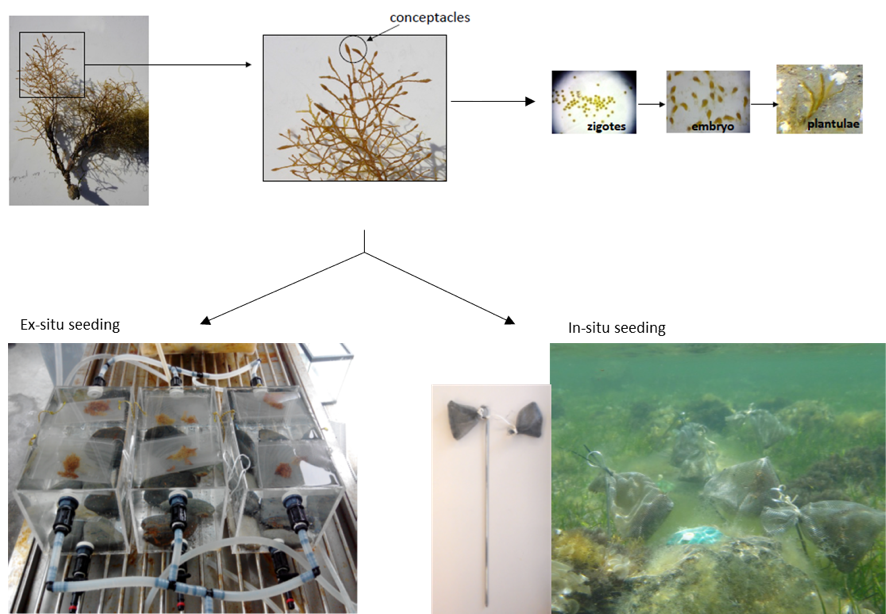 Up to now the obtained results by the two methods are very promising and successful showing similar recruitment rates after the experimental treatments. During MERCES the restoration methods

The main objective of the Azores case study within WP4 of the MERCES project is to develop methodologies and tools for restoration of degraded deep-sea coral gardens. The main pilot action consists in testing the use of cold-water coral transplantation techniques as an active restoration tool, also called assisted regeneration, to aid the recovery of coral gardens potentially impacted by human activities (e.g. deep-sea fishing, seafloor mining).

Fragments of the octocoral Dentomuricea meteor, a common species in coral gardens in the Azores, were collected, maintained in the lab, and transplanted to the summit of Condor seamount (Fig. 1a) using fauna landers. This first trial started in July 2016 during a field cruise onboard the RV Pelagia to the Condor Seamount, funded by the FP7 MIDAS project (Managing Impacts of Deep-seA reSource exploitation) (Fig. 1b). The first set of landers (3 out of a total of 9 landers) was successfully retrieved in March 2017 using IMAR-UAz’s ROV SP (Fig.1c). The landers were located by the ROV, hooked and pulled on board the vessel Águas Vivas (Fig 1d, 1e, see the video on our Youtube channel). The remaining sets of landers will be collected during the summer of 2017 and 2018. 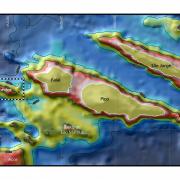 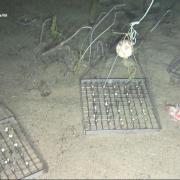 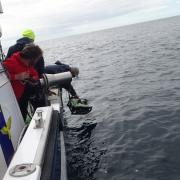 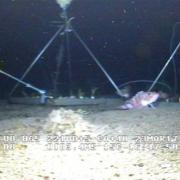 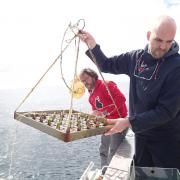 Figure 1. (a) Condor Seamount in the Azores Archipelago; ( b) landers used in the coral transplantation experiments right after deployment; (c) lander retrieval using IMAR UAz ROV SP; (d)  landers found and hooked to the ROV; (e) transport of the landers to the onboard aquarium

Upon arrival onboard, landers were immediately placed in containers with cooled seawater (Fig. 2a), to minimize air exposure. Each coral fragment was photographed onboard the vessel, for future growth rate measurements by comparing these with pre-deployment photographs of the same fragments (Fig. 2b). 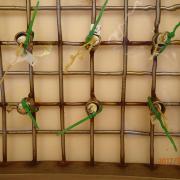 Figure 2. (a) Detail of a lander with the fragments of the coral Dentomuricea aff. meteor immediately after lander recovery; (b) Photographing coral fragments onboard the vessel Águas Vivas, Azores.

The transplantation of a larger and more representative number of cold-water coral species is also being assessed. This work results from a close collaboration with local fisherman and fisheries observers who are bringing different species of cold-water corals accidentally caught as bycatch during their hook-and-line fisheries operations since January 2017 (Fig. 3a). In order to increase their survival, the corals are maintained in a cooler box with seawater onboard fishing vessels (Fig 3b). Upon arrival Horta harbour, corals are transported and maintained at the Deep-Sea Lab aquaria facilities at IMAR-UAz (Fig. 3c). 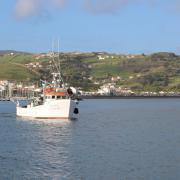 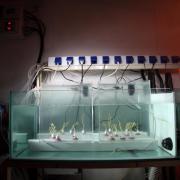 In total we have maintained 8 coral species, and a total of 32 fragments made from these species. From these, 24 fragments are still being maintained in the aquaria facilities. Based on results of coral survival rates, acclimatization success and number of coral colonies captured as bycatch, transplantation experiments in July 2017 will start with the coral species: Callogorgia verticillata, Viminella flagellum and Dentomuricea aff. meteor. A larger number of species will be transplanted in subsequent years.

This project has received funding from the European Union's Horizon 2020 research and innovation programme under grant agreement No 689518.
MERCES is coordinated by the Università Politecnica delle Marche (Italy) - www.univpm.it